Shadow People: What In the Hell Are They? 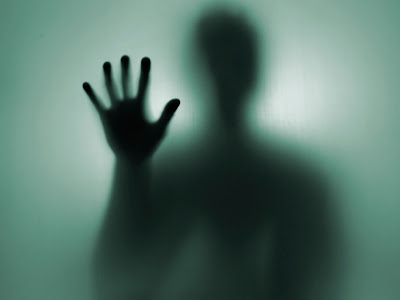 Honestly, I don't think the paranormal community does enough about this phenomena. It intrigues me so much that I incorporated into my book on Kindle "Josiah: Undead Cowboy."

1. They can be seen anywhere, new home, old home, haunted, not haunted, park, public building.
2. They are first seen usually out of the corner of one's eye. When the viewer turns his head, he might see it whiz off or he might watch it a few moments before the shadow person perceives being seen and then startles and disappears.
3. They sometimes come with feelings of dread and doom to the viewer that is palpable, not just a fear reaction, but a sense of something bad about to happen.
4. They are often times seen as 3-4 feet tall, human shaped, completely opaque black as if they have mass. Sometimes, they are seen as tall and slender and are sometimes even reported with a top hat.

INTERDIMENSIONAL? What if they are interdimensional and are used to being in our space, but when they see that we know they're there, they freak out and leave. It's like they're used to being unseen. Why are we sometimes catching glimpses of them? Perhaps modern day human eyes are changing. There are theories that fast refreshing screens on computers and TVs are making our eyes trained for things they hadn't been before looking at things in a natural world outdoors.

HARBINGERS? What if shadowpeople are harbingers? The first time I ever heard of the phenomena was at a SciFi convention I was speaking out. A Native American woman said, "I was in a hospital when I saw a little person who looked like a shadow. It was all black and not defined. It peered around the corner at me and a few times I saw it cross my room. I worried it might mean I was going to die." My son and his friend had a lengthy encounter with one in a graveyard. Others report them showing up in their homes during marital troubles and family issues. Are these terrestrial mothmen? Hmm...

DEMONIC/NONCORPOREAL? This one is bantered around a lot. I have a lot of issues with this concept, the main one being, nothing freaking bad happens when they show up. If they don't want to be seen, you'd think a noncorporeal (a being that has never inhabited a human body) or a demon would be sharp enough not to be seen. They'd also manage to get their job done. When they show up, they'd do the dirty deed (whatever that dirty deed demons and noncorporeals are believed to do).

These continue to surprise us, especially because there is no particular place or person they show themselves for. It can happen to any of us, at any time. I have encountered adult-sized ones and one short one. The short one showed up during a ghost hunt and lined up with physical things that occurred at the time. It was like a prankster. The adult-sized ones I saw were the classic ones that as I looked up at them, they just disappeared mid step. The ones in my childhood home, seemed to follow the same path each time.