Review - "Hunt For the Skinwalker" 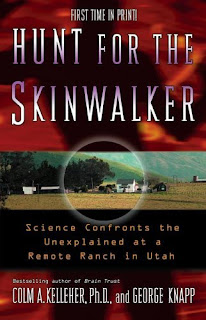 I would like to thank Gummerfan and Naveed for pointing out the Skinwalker Ranch in Utah and the fascination book “Hunt for the Skywalker,” by Colm A. Kelleher, PhD and George Knapp.

This book was mentioned by Naveed and I was curious, I admit. Now that I’ve been researching places with phenomenon and finding strange correlations like the kind of geology and the 33rd parallel latitude, well, the book seemed like a perfectly timely read.

I highly suggest reading this book. I liked it so much, I bought a copy for my father-in-law for father’s day because I know he loves western stories and this is just as good as any Louis L’Amour for suspense in a western setting.